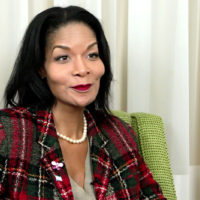 Hi, my name is Sharron Cooks, I live in Philadelphia, Pennsylvania. I am originally from New Jersey. I have lived in Philadelphia for about 20 years.

I was sitting in class one day and I got called to the office. I had no idea why I was being called to the office. So I get to the office and the, I think it was the assistant principal at the time, informed me that there was a situation in which I was in a space that I was not supposed to be in that space. And I asked him for further elaboration at which time he said because I was, y’know, I was 17 at the time — when you’re under 17 I wasn’t of legal age, so that was something that he was going to have to discuss with my parents.

We ended up having a meeting with the assistant principal in regards to me utilizing the girl’s bathroom. I’m like, I just don’t understand what the big deal is. This is the bathroom I’m supposed to be using, I don’t understand what the problem is. The assistant principal reiterated the fact that — Not that there were any calls or anything like that. What I would like people to understand is that it seems as though the administration were the only people who had problems with me utilizing the restroom that corresponded with my gender identity, and they were are making up these hypothetical situations that had not actually happened. So there were not any parents calling the school saying, oh you know I heard there with an incident where someone was in the girl’s bathroom who wasn’t supposed to be in the bathroom. There were no young ladies that were complaining about, oh, there’s someone in this restroom that I think should not be in this restroom.

My parents took the position that, you know, we don’t necessarily understand what’s going on right now. We have feelings around that, however, this is a child, we pay taxes in this county for our child to be educated and our child is being denied that education. So I would come back to school and then I would get suspended again, and then I would come back to school, and I would be suspended again, because there were no policies in that institution and there were no laws to prevent them from doing so.

The impact that had on me is that, as I said before, I ended up dropping out of high school. And then 10 years later I ended up getting my G. E. D. I’ve been to three colleges, I’ve obtained my B.A., I’m currently applying to grad school so I can get my master’s degree in education. And I’m very happy and I’m very blessed because of that. But what I would like people to understand, is that when people are denied, when people are discriminated against, and when they’re denied access to accommodations, particularly our young people… I would like for the parents of trans youth to take a very active role in understanding what their experience is like and advocating for them, and understanding what the policies and the procedures are before they decide to put their child in an environment that’s not going to be really supportive of them.

There are a lot of stereotypes and preconceived notions and I think there is a lot of fear around things that people don’t know, but I think if they actually at the time can know a trans person or actually talk to them one on one, they would actually see that, hey, this person is just like me, I can relate to a lot of the struggles that they have and all of us just trying to navigate the world that we’re in right now.